Not only of religious interest but also historical heritage of Piedmont: the Abbey of Vezzolano, the Sacro Monte di Crea, the Colle Don Bosco, the Sacra di San Michele, … 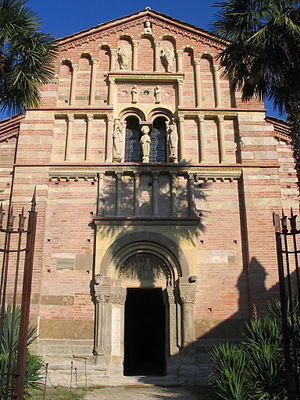 It is the most valuable Romanesque building in Piedmont: according to a legend, the Abbey was founded by Charlemagne; at the beginning it was supposed to be the chapel of a castle and the first written evidence of its existence dates back to 1095. It has a Romanesque facade in terracotta and sandstone, in the 12th century Lombard style. In the center, the portal has valuable reliefs, and is surmounted by three blind galleries on columns. At the bottom of the left side, there is the bell tower, decorated with intertwined arches.
The interior has two apsed naves as well as a third, inserted in the cloister. The naves are divided by pillars, which support acute arches and cross vaults.
The central nave houses a two-order bas-relief: the lower one features 35 patriarchs, ancestors of Mary; in the upper one, the deposition of the body of Mary, the Assumption and the Triumph in heaven.
On the altar you can admire a Gothic triptych in polychrome terracotta.
The cloister is accessed from the bottom of the right nave: it is decorated with frescoes from the 13th and 14th centuries.
In our day, the Abbey of Vezzolano hosts a permanent exhibition on Romanesque. 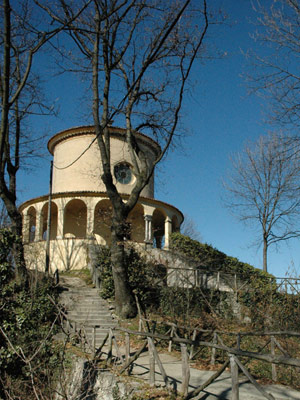 The Sacro Monte di Serralunga di Crea stands on a hill about 400 meters above sea level.
The origin of the locality is due to Sant’Eusebio, bishop of Vercelli, who would have brought the wooden statue of the Black Madonna and Child of the thirteenth century and would have built a first oratory there. It was the king of Italy Arduino, at the beginning of the eleventh century, who wanted the place to have a real church, capable of welcoming the ever-increasing number of pilgrims. On the baroque façade stands out a mosaic that represents the Assumption Madonna to which the church is dedicated.
The interior, with three naves, with pointed arches and cross vaults, preserves important works. Near the sanctuary stands the Sacro Monte. Built in 1589 at the behest of Constantine Maximus, it consists of twenty-three chapels and five hermitages, within which the statuary groups narrate the Mysteries of the Rosary.
The Sacro Monte di Crea is located in a vast natural park of 47 hectares and of considerable botanical interest due to the presence of rare floristic elements or outside the normal allocation. It consists of sedimentary rocks from the Oligomiocene age (marl and sandstone). 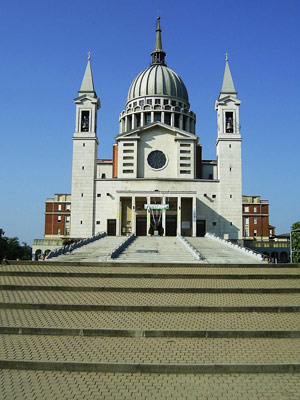 In the hamlet of Becchi, in the hamlet of Morialdo di Castelnuovo Don Bosco, on 16 August 1815 Don Bosco was born.
Founder of the oratories and, in 1854, of the Salesian Society, Don Bosco had his first appearance at the age of nine where, in a dream, he presaged his future mission: to help and educate difficult children.
The sanctuary was wanted by the Salesians at the end of the Second World War, and the first stone was laid in 1961.
The complex includes the Basilica of Don Bosco, where you can appreciate the large statue of the Risen Crucifix in lime wood 8 meters high and the Lower Church; La Casetta, where Don Bosco lived his childhood and childhood; adjacent to the pylon of the dream and the monument to ‘Giovannino juggler’; The House of Giuseppe, brother of Don Bosco, with the adjoining the Rosary Chapel, seat of the Museum of Piedmontese peasant civilization; The Shrine: in honor of Mary Help of Christians: erected on the first centenary of the birth of Don Bosco (started in 1915 and inaugurated in 1918); The Ethnological Missionary Museum: elegant and rich display of objects that testify to the presence of the Salesians in the world.
http://www.colledonbosco.it 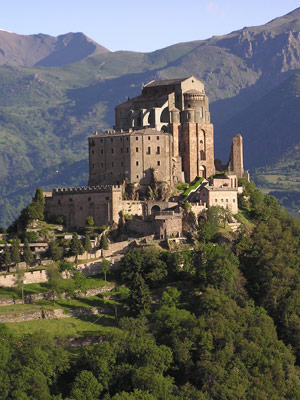 Built between 983 and 987, the abbey intertwines legend and history.
It is said that the work was built by Bishop Giovanni, called Vincenzo, with the help of the angels: from here it takes the name of “Sacra” di San Michele.
Composed of various buildings on several levels, it stands characteristic on the cliff overlooking the lakes of Avigliana and its whole represents the progressive transformation of Romanesque art into Gothic from the twelfth to the thirteenth century.
From the entrance level you reach the church through a vast and steep staircase, called Scalone dei Morti. To its left, an 18-meter pillar supports the floor of the church above; in the wall on the right you can still see arches, niches and tombs, adorned with marble or plastered and painted, where the remains of the monks were kept.
At the top of the staircase is the Porta dello Zodiaco, a work by Maestro Nicolao, made up of marble fragments. The signs of the zodiac are depicted on the right jamb, and the other constellations on the left.
The last ramp of the entrance staircase is a staircase, in green stone, supported by four buttresses and arches, designed by the architect D’Adrade and completed in 1937.
The entrance facade is 41 meters high and contains a combination of colors and geometries: from the straight lines of the gray-iron base, to the curves of the greenish church, with a central apse and a gallery with arches.
The church, inside, is composed of three naves, and houses, on the left wall, the large fresco of the Assumption. Painted in 1505 by Secondo del Bosco di Poirino, it describes three scenes: the Burial of Jesus, the dormitio of Maria and the Madonna Assunta. The hermit cell, the Torre della bell’Alda, the ancient workshop, the museum of the newspaper, and the library comprising 80,000 volumes are part of the architectural complex.