ASTI: medieval city, rich in monuments, churches, palaces and museums to be rediscovered walking through the historic center …
TURIN: the old capital of Italy shines with a retro air with elegant buildings, galleries and squares. Important cultural center you will find museums, the Taste and Book Fair and numerous events not to be missed…
ALBA AND THE LANGHE: the city of the Hundred Towers and the rolling hills of the Langhe rich in vineyards welcome tourists with villages to visit and flavors to rediscover 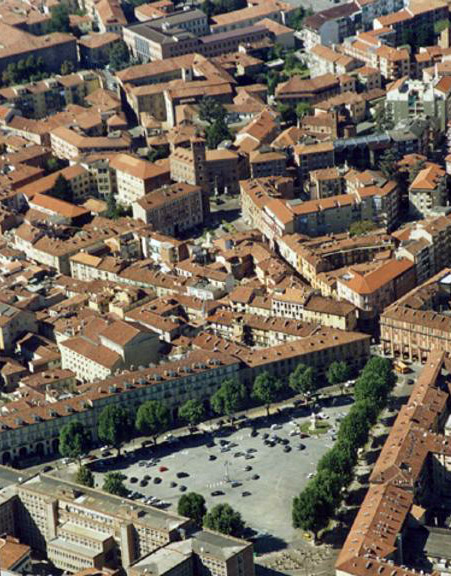 The historical core to medieval mark can be visited on foot along the main street. Numerous museum will enrich your visit: Civic Museum of Palazzo Mazzetti, the Risorgimento Museum, the Paleontological Museum, Lapidary Museum and the crypt of Sant’Anastasio Diocesan Museum San Giovanni.. and soon Palazzo Alfieri.
Famous everywhere for its wines and its cooking, Asti is also worth visiting for its well-preserved historic center. The Middle Ages, a period of great wealth for the city, has left splendid traces on the main monuments: the Cathedral, the collegiate church of San Secondo, the complex of San Pietro, the Sant’Anastasio museum and towers. The baroque-style palaces, including Palazzo Mazzetti seat of numerous exhibitions, and the nineteenth-century elegance of the squares without false notes harmonize with the elegant shop windows of Liberty. The past comes to life every year in the Palio, the oldest horse race in Italy, who runs the 3rd Sunday of September. Strong ties of the city with the countryside instead relive the 2nd Sunday of September with the Festival of Sagre, evocation of rural life and gastronomic feast with specialties of the area. The considerable architectural heritage is the setting for two events.
Asti is a city on a human scale and do not forget the opportunity to enjoy in one of the traditional farms in the area the typical dishes and a good glass of wine.

Turin was the first capital of Italy. It is a town rich in history and culture, that offers tourists more than 40 cultural sites to visit including castles, royal residence, parks and museums. Do not miss: the Egyptian Museum and the National Cinema Museum.
Visiting the historic centre of Turin you’ll discover beautiful squares, baroque palaces and shopping streets; the town is famous for its 18 km of arcades, built in the 18th century, and under which you can find everything you need, from antique shops to the fashion shops as well as the town’s historical cafes.
The  royal palace of Venaria Reale is one of the largest royal residences in Piedmont. The building dates from the middle of seventeenth century when the Duke Carlo Emanuele II Savoia, decided to build a new residence for leisure and hunting. Subsequently expanded and modified in its architecture over the centuries the Royal Palace of Venaria Reale was used for military purposes for almost two centuries. After a long period of complete neglect, the Piedmont administration started a complete restoration project, lasted many years, which recovered some of the original Baroque appearance. We recommend a visit of the gardens and temporary exhibitions which take place throughout the year. 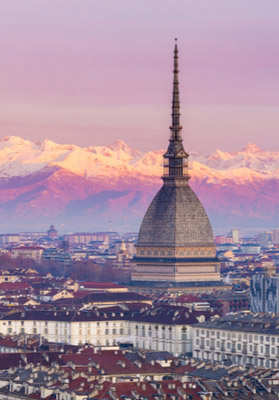 The Langhe is a segment of Piedmont between Monferrato and Liguria, a succession of hills grown almost exclusively in the vineyard. Called by the Romans “deserted langorum” because of the rugged and impenetrable land, so today it is one of the most famous landscapes of northern Italy thanks to the great wines made from it (Barolo and Barbaresco), truffles and almost unique villages.
Alba is a city of about thirty thousand inhabitants situated on the right bank of the river Tanaro, the acknowledged capital of the Langhe. In the course of its history – more than two thousand years – he has been repeatedly invaded and looted, but still retains the old churches and some of the many medieval towers that rose proudly above its houses. For this reason it is also called the city of a hundred towers, have survived ten, erected to patrician vanity or defense, enclosed within the perimeter of an old town which still retains its medieval appearance. The historic center of Alba starts from Via Cavour: lined with medieval buildings (the Artesian Tower, the Loggia dei Mercanti and a noble tower house with remains of pointed windows), leads into Piazza del Duomo. Here stands the Palazzo Comunale, whose assembly room contains among other a painting by Macrino d’Alba, a great exponent of the Piedmontese Renaissance. It dominates the square the Cathedral of San Lorenzo, an imposing building that may already exist, in Romanesque style in the twelfth century, but which was completely rebuilt in 1486 and then rebuilt several times in later periods.
A few steps from the Duomo you reach the Church of San Domenico, with early Gothic style, built in the late twelfth century.